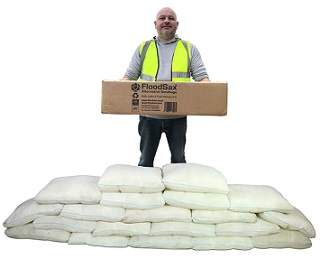 The weather forecast looks dire for the next month as the UK struggles with one of the wettest winters on record … but there is light (and sunshine) at the end of the tunnel.

Severe weather forecasts are in force across the UK and 40,000 FloodSax alternative sandbags are available now to help hold back the floodwater. They have been used in action during both Storm Ciara and Storm Dennis.

The Met Office has revealed its forecast up to March 18 and it’s horrible even after the next few days which will see heavy rain and gale force winds. From early next week until March 4: “Unsettled and often windy conditions are expected to continue with areas of rain moving east across the UK interspersed with brighter, showery interludes. Rain is likely to be heaviest across western and northwestern areas.”

By mid March there should be a slow improvement: “A continuation of the unsettled weather is expected at first with spells of rain and strong winds broken by brighter but showery conditions. The heaviest rain and strongest winds are expected in the northwest with drier conditions expected in southern and eastern parts.”

But the Japan Meteorological Agency has just released its long range global weather forecast which suggests we are in for a warm and dry spring. The Agency is forecasting a large ridge of high pressure sitting right over the top of the UK which should bring warmer than average temperatures by day.

This should continue into April with May becoming more unsettled as the ridge shifts to the west of the UK.

This is reported on the website https://www.gavsweathervids.com which states: “A very different spring pattern compared to the very wet winter 2019/20 pattern we've just had. High pressure in control for much of the time bringing mainly dry weather and hopefully quite a lot of sunshine. A warmer than average spring would be expected but potentially cooler in May.

“This would certainly be a pattern that would allow plenty of respite and recovery from the recent flooding.”

More than 2.5 million have now been sold worldwide. They are available at all branches of Travis Perkins or for the full list of our UK suppliers go to http://floodsax.co.uk/buy/uk-suppliers