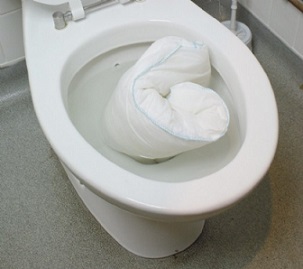 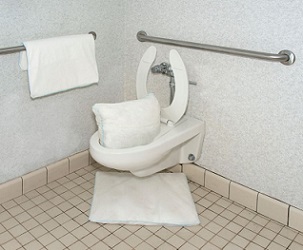 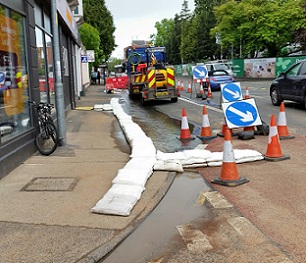 How do I stop floodwater from coming up through my loo?

Many people don’t realise that when an area gets flooded the contaminated water can flood into your home or business through the toilet.

All floodwater is full of bugs and nasties but sewage floodwater really is as disgusting as it gets but how do you stop floodwater from backing up through your toilet?

One way is to roll up a FloodSax and pop it down the loo when flooding strikes. Its super-absorbency means it will soak up the water, expand and stop any more floodwater getting in through the toilet pipes.

When FloodSax alternative sandbags are fully immersed in water they absorb it so quickly that within 5 minutes they resemble traditional sandbags but their uniform shapes mean they are easier to stack into a flood barrier to keep water out of homes or businesses or to divert it away and down the drains.

The problem of sewage flooding is so severe that figures just released by the Environment Agency show that water companies discharged raw sewage into rivers in England more than 400,000 times in 2020 alone – up from 293,000 in 2019 - which equates to 3 million hours of discharges.

They are allowed to do this after severe bad weather such as prolonged heavy rain to try to protect properties from flooding and sewage backing up into homes, businesses and streets.

FloodSax managing director Richard Bailey said: “Many people don’t think of the sewer system when flooding is imminent or is actually happening but unfortunately it happens quite regularly.

“When an area is badly hit by flooding – or the sewage pipes get blocked – the water down there can quickly back-up and its only escape is back through the toilet. When this happens it’s the most horrible thing imaginable and so you need to take this simple precaution of popping a FloodSax down to prevent it.

“Sewer flooding can quickly cause untold damage and the operation to repair it and properly deep-clean where it’s been can be colossal.”

Sewers are now getting overloaded with water due to several factors ranging from climate change – we are seeing far more flash flooding in the UK and worldwide – to driveways replacing lawns which traditionally soaked a lot of the rain up.

According to Severn Trent Water which covers most of the midlands: “Sewers may take away rainwater from roofs, patios, driveways and roads as well as the waste water from your home. As the climate changes, our population grows and green spaces that once provided natural drainage are paved over, the amount of water our sewers need to drain away increases. This, combined with very heavy rainfall, can overload the sewers causing them to flood.

“Sometimes high river levels during bad weather can result in river water getting into the public sewerage network and causing flooding.”

People can often be to blame for sewer flooding by flushing the wrong things down the toilets or tipping fat or oil down sinks which ultimately leads to major sewer blockages and the water backing up.

According to United Utilities: “A common cause - both on the public sewers and on customers' own drainage pipes - is flushing the wrong things down the loo. Items such as cotton wool, baby wipes and cotton buds can clump together, causing blockages, sewer flooding and major expense.”

Yorkshire Water warns that flooding from sewers is a continual risk: “If weather conditions are extreme, like a major storm, we can’t guarantee a sewer won’t flood or leak – even if we respond quickly.”

This also, in effect, warns people to have their own protection in place 24/7 and having a pack of FloodSax in your house or business will sort that out. They are incredibly space-saving to store and quick and easy to deploy.