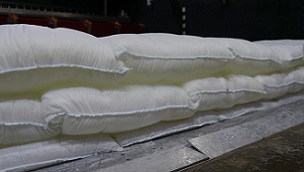 This FloodSax anti-flood wall held back 12 tonnes of water 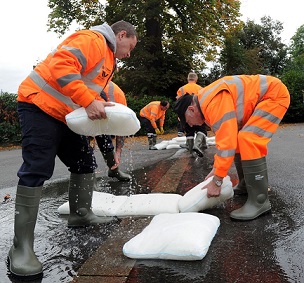 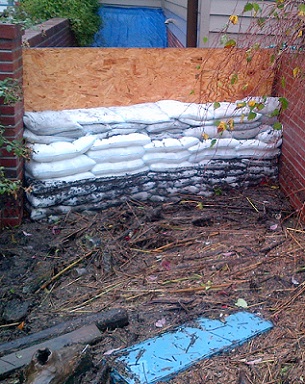 FloodSax alternative sandbags have undergone tough tests to show just how good they are at holding back water.

The sandless sandbags were put under extreme pressure in a special flood testing centre in Worcestershire … and held water weighing around 12 tonnes back.

The FloodSax were built into a wall three high and the 3.3m wide barrier held back 12 cubic metres of water in the testing tank. Each cubic metre of water weighs around a tonne.

FloodSax managing director Richard Bailey said: “We like to challenge ourselves by testing FloodSax to the limit under stringent test conditions every two or three years and ensure they work well in the stacking pattern we advise people to use.

“We want to see for ourselves just how they cope when put under extreme pressure. People forget that water is incredibly heavy and a torrent of floodwater can harness a tremendous power.

“If that gets into your home or business it will cause horrendous damage and all the hassle, trauma and misery that goes with it.”

The team also tested the company’s heavy duty FloodSax which tends to be used by bigger organisations working in more extreme conditions and that passed the tests too.

The tests were carried out at the M3 Floodtec state-of-the-art flood testing centre in Droitwich that has its own flood house and can test a range of flood mitigation products up to a water depth of 900mm to the new British Standard 851188:2019. This BS criteria includes flow testing, wave generation and impact load testing.

Mr Bailey added: “When sandbags have undergone similar tests the sand has been washed out of them meaning the bags not only fail to keep the water out, the sand causes even more damage when it gets in. FloodSax and other anti-flood devices are a much cleaner and more efficient way to protect yourself from the dreadful impact of flooding.”

Some councils recommend FloodSax alternative sandbags for flood protection which are a flexible alternative to traditional sandbags and are space-saving to store and quick and easy to deploy.

When FloodSax come into contact with water they absorb 20 litres which transforms them from being as light as a pillowcase to being more effective than traditional sandbags in around 8 minutes.