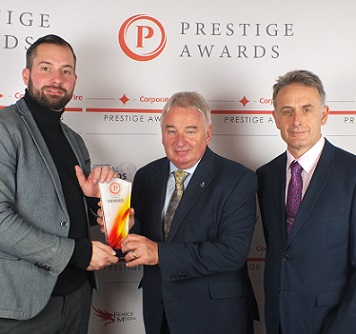 A Yorkshire company has won a regional award for its three innovative products – including a ‘sandless’ sandbag.

Environmental Defence Systems Ltd is a pioneering company that has three products – FloodSax, BlastSax and AvSax - that are saving property and lives worldwide.

The Huddersfield-based company has been named Innovative Product Supplier of the Year in the Leeds and West Yorkshire Prestige Awards 2020.

FloodSax alternative sandbags are space-saving to store and quick and easy to deploy so homes and businesses can be protected from flooding and leaks 24/7. They resemble a large pillowcase until they come into contact with water and then a special gelling polymer inside them absorbs the water which transforms them into ‘sandbags’ but without any sand. They can be used to build barriers to stop floodwater getting in or can simply be put on leaks and spills and will soak them up.

BlastSax are military grade sandless sandbags engineered to mitigate the impact of small explosive devices and can be taken to the scene and deployed far more quickly than conventional sandbags. They have also proven to be able to stop bullets.

More than 15,350 AvSax fire containment bags are now on aircraft operated by 80 airline companies across the world – including some of the biggest and best-known. AvSax have been used 32 times to deal with emergencies since the start of 2017. Deployment is so effective that extremely expensive diversions to alternate airports are avoided.

EDS managing director Richard Bailey said: “It’s great to pick up the award, especially as the AvSax has previously won the Queen’s Award for Enterprise. All our products are pioneering and unique and are designed to save lives and property.

“If people are flooded the cost of the damage is usually astronomical and the misery and trauma flooding victims suffer can have a serious impact on their mental health.”

EDS products are sold all over the world from the USA to Australia and Europe to the Far East.