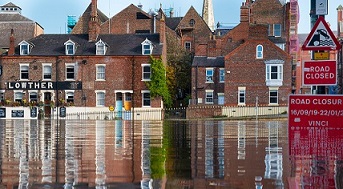 Are the last 10 years really hottest on record according to international weather experts?

Global warming has accelerated over the last 10 years sparking serious problems such as severe flooding.

A report by the World Meteorological Organisation (WMO) says this year has been one of the hottest ever recorded which has led to some extreme weather globally.

It reveals the year 2019 concludes a decade of exceptional global heat along with melting ice and record sea levels driven by greenhouse gases from human activities.

The WMO – part of the United Nations which provides authoritative weather, climate, hydrological and environmental services worldwide - says the global average temperature in 2019 (January to October) was about 1.1 degrees Celsius above the pre-industrial period.

Concentrations of carbon dioxide in the atmosphere hit a record level of 407.8 parts per million in 2018 and continued to rise in 2019. CO2 lasts in the atmosphere for centuries and the ocean for even longer, causing long-term climate change.

Sea level rise has accelerated since the start of satellite measurements in 1993 because of the melting of ice sheets in Greenland and Antarctica, according to the report which also says sea water is 26% more acidic than at the start of the industrial era.

WMO Secretary-General Petteri Taalas said: “On a day-to-day basis the impacts of climate change play out through extreme and “abnormal” weather. And, once again in 2019, weather and climate-related risks hit hard. Heatwaves and floods which used to be “once in a century” events are becoming more regular occurrences. One of the main impacts of climate change is more erratic rainfall patterns. This poses a threat to crop yields and, combined with population increase, will mean considerable food security challenges for vulnerable countries in the future.”

The central USA, northern Canada, northern Russia and southwest Asia all suffered abnormally high rainfall. The 12-month rainfall averaged over parts of the United States for the period for July 2018 to June 2019 (962 mm) was the highest on record.

This year has also seen major flooding in northern Argentina, Uruguay and southern Brazil, with losses in Argentina and Uruguay estimated at US$2.5 billion.

For more on this please go to https://public.wmo.int/en/media/press-release/2019-concludes-decade-of-exceptional-global-heat-and-high-impact-weather

There has been a massive increase in demand for anti-flood devices in recent years and more than 2.5 million FloodSax alternative sandbags have been sold worldwide since 2007.