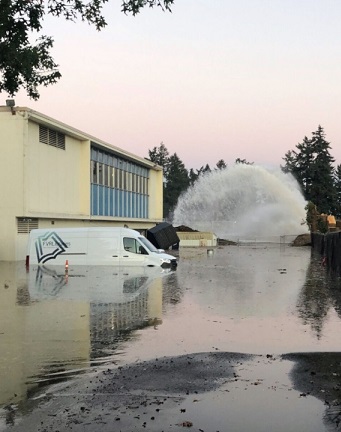 Massive leaks from water pipes can cause huge flooding in minutes, wreaking damage running into tens of thousands of pounds.

A graphic example of how destructive this often is has just happened in the USA when a construction crew hit an 18-inch cast iron water pipe at the regional library HQ in Fort Vancouver, Washington, spilling an estimated 1.4 million gallons of water.

By the time emergency response engineers arrived, the force of the water had made the damage far worse to the point there was a 10ft split in the pipe which flooded the library’s basement, causing extensive damage.

This is why facilities managers are urged to have flood protection in public and commercial buildings as flooding can happen anywhere and at any time so reactions have to be rapid.

Many public buildings now have FloodSax alternative sandbags which can be used as an effective flood protection barrier to stop water getting into them but can also be deployed inside to soak up water from burst pipes or divert it away from expensive, high technology equipment.

FloodSax are space-saving to store and easy to deploy. They are vacuum-packed and resemble a large pillowcase but once they come into contact with water they inflate to weigh 20kg (44lbs) which makes them more effective than heavy, cumbersome traditional sandbags at keeping floodwater out.