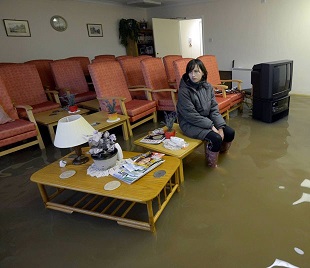 The terrible misery of a flooded home

Can flood victims can get insurance again for their homes … and sometimes significantly cheaper too?

Is it really possible for people whose homes have been flooded to continue to get insurance … and often significantly cheaper than what they paid before?

A Government scheme with the insurance industry has been life-changing for flood victims who previously couldn’t get any insurance at all.

Flood RE is a not-for-profit scheme that aims to ensure that people living in high-flood risk areas can continue to get affordable home insurance.

Since Flood Re was launched in 2016, the availability and affordability of home insurance for householders at risk of flooding has improved significantly and it has helped an estimated 250,000 people. Independent research has shown that 93% of householders whose property has flooded previously are able to receive quotes from five or more insurers – compared to 0% before the scheme’s introduction – and four out of five householders with previous flood claims have been able to find quotes that are more than 50% cheaper.

Now it is urging people whose lives have been blighted by the severe autumn floods to shop around to ensure they are getting the right cover for their homes. Homeowners can use price comparison sites, contact insurers directly or speak to a broker to secure the best home insurance deal for them.

Flood Re spokesman Dermot Kehoe said: “Communities across Yorkshire have been devastated by the emotional and financial impact of the recent flooding in the area.

“Our aim is to ensure those living in areas that are at risk of flooding – such as those in Yorkshire – are still able to access affordable home insurance in the future.  Since our launch, Flood Re has helped more than a quarter of a million homes.

“Householders should shop around to ensure they are getting the right home insurance deal for them.”