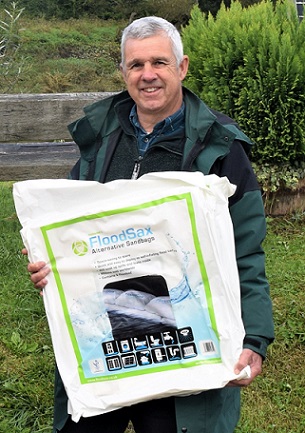 FloodSax alternative sandbags in action holding back a torrent of floodwater 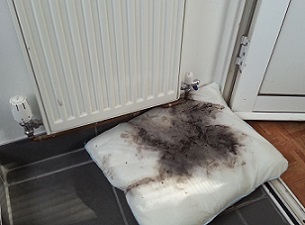 FloodSax can also be used indoors to absorb drips, leaks and floods

A council has hundreds of FloodSax alternative sandbags to help people in dire need of flood protection in an emergency.

Forest of Dean District Council based at Coleford in Gloucestershire has almost 700 of the award-winning FloodSax which have proved themselves in action for flood defence, flood mitigation and flood protection worldwide.

The FloodSax were devised by Yorkshire entrepreneur Richard Bailey at Huddersfield-based Environmental Defence Systems Ltd in 2007 and since then almost 3 million have been sold worldwide.

Forest of Dean District Council invested in the FloodSax after the area was badly hit by flooding just before Christmas 2020.

The worst deluge was on December 23 when intense rain fell on saturated ground from morning until midnight with an estimated 60mm of rain in just 16 hours.

More than 450 properties were affected with over 300 flooded internally and it’s thought to have been the worst flooding in that area since July 2007.

A report by the council concluded: “With the accelerating impacts of climate change short, intense, geographically diverse rainfall events such as these will become the norm as opposed to the exception.”

Cabinet member for the environment Clr Sid Phelps said: “We are pleased to be able to help our at-risk communities by supplying these new defences to the local councils as we head into winter.

“We have limited powers to help manage flooding but we want to play our part to support the community and we hope that by providing these defences it will support those most at risk.”

The council is also urging people whose homes are at risk of flooding to organise their own flood protection so they are prepared for flooding 24/7. One way is to have FloodSax alternative sandbags which are space-saving to store and quick and easy to deploy.

Several other councils such as Gosport Borough Council in Hampshire, Derbyshire County Council and Solihull Council in the West Midlands use FloodSax and to read more go to http://www.floodsax.co.uk/news/why-these-councils-rely-on-floodsax-sandless-sandbags-to-stop-horrendous-damage-during-flooding-emergencies/

When FloodSax come into contact with water they absorb 20 litres which transforms them from being as light as a pillowcase to being more effective than traditional sandbags in around 8 minutes. This makes them ideal for flood prevention, flood protection and flood mitigation.

Flooding is the greatest natural disaster risk in the UK with an estimated 1 in 6 properties in England and Wales, 1 in 11 properties in Scotland and 1 in 34 properties in Northern Ireland now at risk of flooding. Six of the 10 wettest years on record have occurred since 1998 so climate change can be seen to be having a major impact on this.

According to the Association of British Insurers (ABI) the average claim for a flooded business is £70,000 – that’s seven times higher than the average non flood claim which is around £11,500.

The average costs of flooding claim on home insurance is around £32,000.