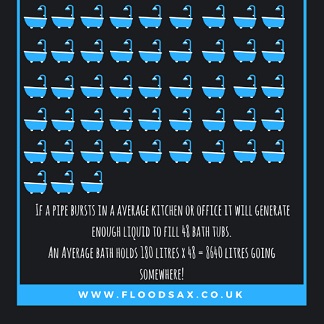 A typical leaking pipe inside a house will generate 48 baths full of water – that’s just short of 2,000 gallons wrecking your home 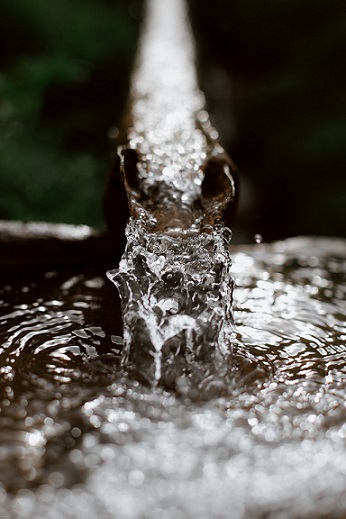 Water gushing out of a pipe. Photo by Eberhard Grossgasteiger from photo website Pexels.

Flood Action Week (Nov 9-15) is now underway and water damaging your home or business can be one of the most traumatic experiences you can suffer in life … but did you know there is a difference between a flood and an escape of water?

Most people would assume that any water flowing from a burst pipe is a flood but insurance companies have a marked difference in terms when it comes to what is a flood … and what’s an escape of water.

In short, flooding is what happens when water comes into your home or business from outside such as a flash flood, water pouring in from an overflowing river, stream or perhaps even a burst water main.

But if it happens inside the home or business from a burst pipe or an overflowing bath then in insurance terms it’s classed as an escape of water. Escape of water happens worryingly regularly and is a massive part of the insurance business. According to the Association of British Insurers, escape of water accounts for one in four domestic property insurance claims.

The claims are huge as flooding is known within the insurance industry as “the thief who takes everything.”

The Association of British Insurers states: “The average household flood claim is likely to be about £31,000 while the figure is £70,000 for a flooded business. This compares to the average claim across all insured risks of £2,200 under a home insurance policy and an average claim of £11,500 on a commercial policy.”

One major insurance company, Aviva, reveals it deals with around 24,000 escape of water claims every year.

How much water actually escapes during a typical escape of water inside a house?

Well, to put it into terms we can all easily understand, if a pipe bursts in an average kitchen or office it will generate enough liquid to fill 48 bath tubs.

The Association of British Insurers (ABI) says people need to do more to protect their homes and businesses. It states: “Individual property owners also need to do more to make their homes and businesses more flood resilient and understand the benefits of being able to get their lives back to normal quicker next time it floods. This can involve using products to help keep water out of a building.”

There is a way to help protect your home and business … and that’s FloodSax alternative sandbags. After all, local councils have no responsibility to provide sandbags and when storms strike people have little time to prepare or react and the damage can be colossal. The ABI says that when storms Ciara and Dennis struck the UK in February 2020 the payout from insurance companies was more than £360m (https://www.abi.org.uk/news/news-articles/2020/03/insurance-pay-outs-to-help-customers-recover-from-storms-ciara-and-dennis-set-to-top-360-million/).

FloodSax are more effective than traditional sandbags at keeping water out of your home or business. They are space-saving to store and quick and easy to deploy compared to heavy, cumbersome sandbags.

FloodSax resemble large pillowcases until they come into contact with water and when they do they absorb the water to inflate to weigh 20kg (44lbs) which makes them more effective than traditional sandbags at keeping floodwater out. It means 20 fit into a cardboard box which is easy to store and for one person to carry.

But they also work inside to deal with escapes of water – especially if the leak is in a hard-to-reach place. Pop a FloodSax beneath it and it will soak the water up as it drips onto the FloodSax.

Source: The Association of British Insurers at https://www.abi.org.uk/news/news-articles/2019/11/yorkshire-and-midlands-flood-damage-payouts-set-to-top-100-million-says-the-abi/