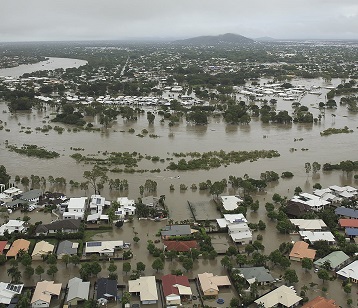 Catastrophic flooding in Townsville, Queensland, Australia and the table below reveals the country's most flood-prone areas 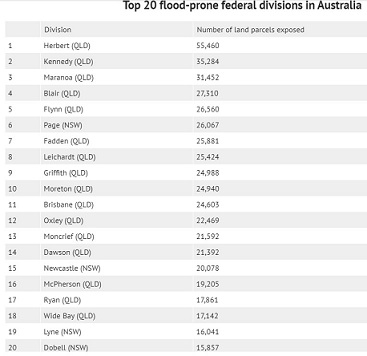 Floods now the most costly disasters in Australia with more than 25,000 insurance claims from just one town

Think of Australia and sun and barbecues are probably the first things that spring to mind but this vast country can also be very vulnerable to flooding.

One of the biggest markets for FloodSax alternative sandbags is Australia and when it rains  it can be a catastrophic torrent bringing misery to both homeowners and businesses.

The Australian Government admits that “floods are estimated to be the most costly natural disaster in Australia.”

It adds: “Flash flooding, otherwise known as overland flooding, can occur almost anywhere there is a relatively short, intense burst of rainfall such as during a thunderstorm. As a result, the drainage system has insufficient capacity or time to cope with the downpour. Although flash floods are generally localised, they pose a significant threat because of their unpredictability and normally short duration.

“Just because an area has not flooded in the past does not mean it will not flood in future.”

Analysis by the Insurance Council of Australia has revealed 20 of Australia’s most flood-affected areas and top of the list is the flood-ravaged city of Townsville. Sixteen of the top 20 are in Queensland while the rest are in New South Wales.

All of the top 20 had suffered from severe flooding over the past decade and just one catastrophic flood in Townsville had led to more than 25,500 insurance claims with insurance losses topping $1bn.

Here is the Australian government’s definition of what is a flood.

“To put simply flooding is water where it’s not wanted. It’s the covering of normally dry land by water that has escaped or been released from the normal confines of any lake or any river, creek or other natural watercourse, whether or not altered or modified; or any reservoir, canal, or dam. Flooding is also caused by the volume, spatial distribution, intensity and duration of rainfall.”

Thousands of FloodSax alternative sandbags are sold in Australia every year as a flexible alternative to traditional sandbags. FloodSax are space-saving to store and quick and easy to deploy.