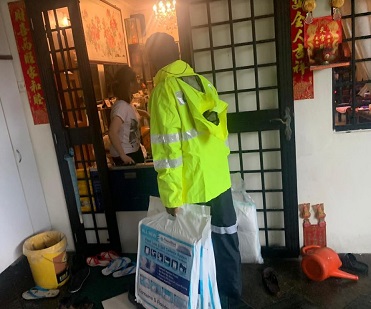 FloodSax being delivered to a flooded business in Singapore 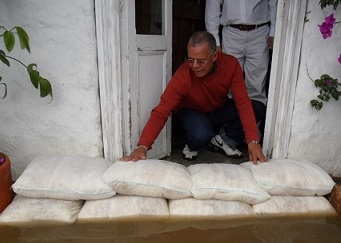 The award-winning FloodSax were distributed to homes and businesses at serious risk of flooding when more than half of Singapore's average monthly November rainfall fell in less than 4 hours.

The handy-sized bags of FloodSax were deployed by Singapore’s national water agency called the Public Utilities Board (PUB) and a spokesman said: “Our quick response teams were deployed to render assistance and inspect the drainage system for any obstructions. PUB officers distributed inflatable sandbags as a precaution against floodwaters.”

The downpour was so bad that it was within the top 1% of maximum daily rainfall records for the past 39 years in Singapore. Based on climate records, November is the worst month for rain in Singapore. According to the National Environment Agency Singapore gets 2342.2mm (92 inches) of rain in an average year and around 250mm (10 inches) falls there just in November.

FloodSax (www.floodsax.co.uk) were invented by Richard Bailey, managing director of Environmental Defence Systems Ltd based in Huddersfield, West Yorkshire, England, and well over 2.5 million have now been sold worldwide in countries ranging from the USA to Australia and from Singapore to Sweden.

Some councils recommend FloodSax alternative sandbag flood barriers for flood protection which are a flexible alternative to traditional sandbags that are space-saving to store and quick and easy to deploy.