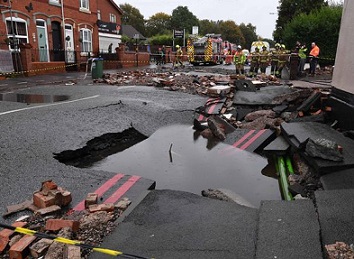 A fractured water mains ripped up this main road in Tipton, West Midlands

It’s hard to believe but this dreadful damage was caused by a burst water mains.

The ultra powerful gush of water partially demolished a house and ripped up a road in Tipton, West Midlands. The home was badly damaged after a massive torrent of water shot more than 20ft high.

The total cost of the damage will run into many tens of thousands of pounds.

Many water companies are now equipped with FloodSax ‘sandless’ sandbags which can be quickly deployed to protect homes and businesses from flooding in the immediate aftermath of a serious incident.

It saves the companies a potential fortune in compensation claims from a burst water pipe flooding properties which usually causes massive damage inside.

FloodSax alternative sandbags are space-saving to store and quick and easy to deploy – unlike sandbags which need a vast storage space and are a logistical nightmare to get to the scene of a flood.