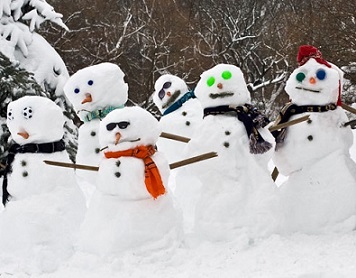 Nigel and his snowmates are sure hoping for a White Christmas

So just what are the chances for snow on Christmas Day?

The Met Office has this morning released its long-term forecast for Christmas … and it looks to be reasonably quiet with the chance of snow for those living in hilly areas.

The forecasters are predicting unsettled weather during December but it seems most folk won’t be seeing snow on Christmas Day with temperatures due to be around average or just above for the time of year.

The Met Office says: “Towards the end of 2019 there is a possibility that we will see a transition to some longer, more settled and colder periods.”

But forecasters are at pains to point out they can’t give any kind of accuracy in the snow forecast until 5 days before Christmas.

And what is a white Christmas anyway?

But is that truly white?

The Met Office adds: “The last widespread white Christmas in the UK was in 2010. It was extremely unusual as not only was there snow on the ground at 83 % of stations (the highest amount ever recorded) but snow or sleet also fell at 19% of weather stations. White Christmases were more frequent in the 18th and 19th centuries. Climate change has also brought higher average temperatures over land and sea and this generally reduced the chances of a white Christmas.”

According to the Weather Outlook website https://www.theweatheroutlook.com there is just a 14% chance of a white Christmas in northern parts of Yorkshire and Lancashire but too mild for snow in the south, Wales and Northern Ireland. It’s expected to be cold but dry in the midlands and Scotland.

For those wanting a bit of techy fun the website https://www.netweather.tv  has an interactive Santa Shaker snow globe and you pop in the area where you live in and it’ll reveal the chances of snow. This one predicts a 25% chance in northern England with a 40% chance in Scotland and 15% in the south.

And the wonderfully-named http://www.willigetawhitechristmas.com/ has an interactive snowman.

But whatever the weather, always be prepared for snow and the risk of floods with FloodSax alternative sandbags.