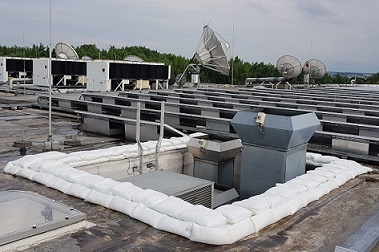 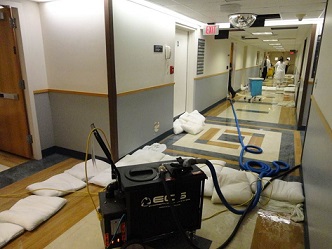 Here’s how commercial buildings are riddled with potential flooding problems

Underestimating the possibility of leaks inside commercial buildings could be a VERY expensive mistake to make … and we are not talking about leaks caused by rain.

Facilities management companies are probably aware that flooding is known as “the thief who takes everything” as the damage caused by water can be colossal. It ruins everything it touches from plaster on walls to floor coverings – and that’s before all the expensive equipment such as computers and photocopiers you’ll find in the average office.

There are lots of potential plumbing problems inside commercial buildings run by facilities management companies that can lead to flooding damage running into hundreds of thousands of pounds. Small leaks can even cause much greater damage than natural disasters as they happen more frequently and usually remain unnoticed for a long time.

And don’t forget that water use in commercial buildings operated by facilities management companies is massively greater than in homes so when leaks happen they can quickly involve hundreds of gallons of water.

In the USA an internal leak was in danger of causing considerable flooding and damage inside a hospital but the problem was quickly stopped by FloodSax alternative sandbags. These dual-purpose sandless sandbags are space-saving to store and deploy and resemble pillowcases until they come into contact with water which their internal gelling polymer quickly soaks up so they become as taut as traditional sandbags.

They were also deployed to stop water flooding into a large building in Belgium through a faulty air conditioning system.

Here’s just a few of the typical flooding problems facilities management companies can encounter in commercial buildings and their tell-tale signs. The question is are facilities managers prepared to deal with them 24/7?

Broken water pipes are the most common cause of severe damage as a large amount of water will escape in a short time. Pipes can easily burst in cold weather and are usually hidden inside walls so can be difficult to trace and repair. Take action as soon as you spot the slightest evidence of a water leak.

The first signs of a leaking pipe are:

Springy floors which may also be oozing water.

Toilets get a lot of use in large buildings, parts get worn and, let’s face it, some people can be rather heavy-handed treating office facilities with far less care than they would their own at home. Broken parts such as a fill valve can be quickly and cheaply replaced so it’s best to do regular maintenance checks on them.

Taps can also develop leaks due to worn or faulty parts – and that water can sometimes find its way under floors and wall cavities causing untold damage until the tell-tale signs eventually appear through ceilings or on floors.

Shower leaks can be fast and furious. If you have showers on an upper floor and the waterproofing such as seals and grout gets worn away an amazing amount of water can escape into the fabric of the building. Damp patches will probably appear on the ceiling on floors below and if that happens don’t ever ignore them. It’s an early warning of a potentially serious and very expensive flooding problem to solve, especially if it causes structural damage.

Facilities management staff need to watch out for water in cellars and basements which could be caused by a wide range of problems including faulty damp-proof courses, blocked drains, leaking pipes and a natural rise in ground water levels after torrential rain. Once the basement concrete gets wet it can start to crumble and corrode quite quickly.

Roofs are clearly a vulnerable area as they take the brunt of bad weather and can be damaged by strong winds, huge downpours, hail and heavy snowfall. If flashing or other roofing materials get damaged or have not been installed correctly then an awful lot of water can seep in as it would through gaps next to gutters, downpipes and skylights. Facilities managers need to be aware that most commercial buildings have flat roofs and these do start to really deteriorate after 15 to 20 years. Indications of a leaking roof could include damp patches, rust stains or discoloured areas on ceilings and walls; decaying or stained soffits and fascia; deteriorating indoor air quality; a musty smell in the upper floors.

In conclusion, don’t be too scared by all of this as the latest advancements in water leak sensing and shut-off technology make it easy to catch a leak at its source and fix the problem before it becomes too late. An inbuilt automatic water leak system will alert the building management to the precise location of a leak within minutes of water sensors detecting the leak. Some are wireless which means when they are activated by a leak they trigger an alarm and send notifications by phone, text and email to the building’s facilities management company. Advanced water leak sensors automatically shut off water in certain applications when a leak is detected.

And, finally, always make sure you have some FloodSax alternative sand bags in the building.These sandbags are designed to quickly soak up leaks and spills, especially in the hardest-to-reach areas.