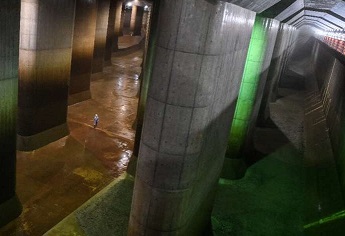 The amazing underground caverns designed to stop Tokyo from flooding 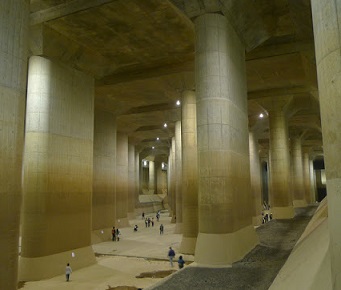 Japan’s capital city Tokyo is one of the rainiest on Earth with 3 inches falling in just one hour getting increasingly common in this age of global warming and climate change.

Yet the city is arguably the best protected in the world when it comes to flooding as engineers have constructed vast underground caverns where the water can cascade in and then be pumped out into a river.

It reads like the stuff of fantasy and fiction but it’s real with some of these caverns higher than the Statue of Liberty which is 305ft (93m) high and held up with a vast network of concrete pillars, each weighing 500 tonnes so it even resembles a cathedral.

It’s called the Kasukabe flood tank and has already been used 7 times this year during the typhoon season which runs from June to the end of October.

The main Kasukabe underground reservoir – there are 11 of them in all - is connected to a four-mile tunnel and the system can release water into the nearby Edogawa river at a rate equivalent to discharging a 25m (83ft) swimming pool every second. The Kasukabe reservoir has helped reduce the number of homes damaged by flooding in nearby areas by around 90%.

It was built in 2006 at a cost of 230 billion yen (£1.67 billion), but saves an absolute fortune in what would otherwise be catastrophic flood damage above ground.

Why is Tokyo so vulnerable to flooding?

Rising oceans make the Tokyo area vulnerable to storm surges with large areas of the city now below sea level and protected by old dykes. It also has more than 100 rivers running through it.

The rainfall is extreme. Across Japan the frequency of rainfall of more than 3 inches an hour has jumped 70% in recent years due to global warming and this, along with the potential for destructive earthquakes and tsunamis, make Tokyo the riskiest metropolitan area in the world, according to a 2014 study of natural disaster risks by the Swiss Re reinsurance firm.

To watch a YouTube video on the underground tunnels go to https://www.youtube.com/watch?v=tvUgOtS4kFQ

Most areas of the world don’t have such vast anti-flooding measures and so still rely on sandbags … but these have their limitations.

One of the best ways to protect homes and businesses from the risk of flooding so they are prepared 24 hours a day, seven days a week and 365 days a year is to have FloodSax (www.floodsax.com) alternative sandbag flood barriers for flood protection which are space-saving to store and easy to deploy. They are vacuum-packed and resemble a large pillowcase but once they come into contact with water they inflate to weigh 20kg (44lbs) which makes them more effective than heavy, cumbersome traditional sandbags at keeping floodwater out.

More than 2.5 million FloodSax have been sold worldwide.