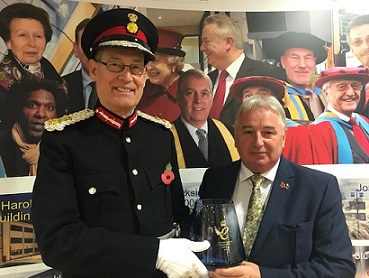 Richard Bailey left school at the age of 14 with no qualifications ... and now he's managing director of a business that sells its potentially life-saving products worldwide.

There were a couple of reasons why he left school so early in 1970 - he was dyslexic which was never picked up - but more importantly his father was blind so Richard felt the need to get out in the world of work to bring income into the family home.

After starting his career in commercial vehicle sales Richard left to set up his own companies and over the last 25 years or so has had outstanding commercial success which has included two prestigious Queen's Awards for Enterprise for their sheer innovation.

The most recent was the AvSax fire containment bag (www.avsax.com) which won the Queen's Award for Enterprise in April and 62-year-old Richard has now been formally presented with the award by the Queen's representative in Yorkshire, the Lord Lieutenant Ed Anderson.

Accepting the award, Richard – who runs his business Environmental Defence Systems Ltd (www.edslimited.co.uk)  in Huddersfield, West Yorkshire - said: “The underlying principle throughout my working life is making a difference, coming up with ideas which just might save lives.

“Around 20 years ago I devised an inflatable path to be used for rescues from water and mud and within a week of Lancashire Fire Brigade buying it they used it to rescue a grandad and his grandson who had been stranded by the incoming tide.

“The grandson wrote to me and thanked me for coming up with the idea. That letter says it all, it really is about making a difference.”

Richard's previous Queen's Award for Enterprise was back in 2001 when he received it for devising a mobile decontamination unit that was used by Staffordshire Ambulance Service.

The AvSax is a unique invention that is used to deal with lithium-ion battery fires in personal electronic devices such as mobile phones and laptops that are brought on board by passengers.

It is in use with many of the world’s best known airlines and has been used 28 times to deal with emergencies since the start of 2017 – the most recent incident happening on November 2.

More than 50 airlines across the world now carry them which means there are well over 13,000 AvSax in the skies.

The fires are caused by lithium-ion batteries going into what is known as thermal runaway inside the electronic devices.

When one cell in a battery overheats it can produce enough heat – up to 900°C (1652°F) – to cause adjacent cells to overheat. This can cause a lithium battery fire to flare repeatedly.

Incidents of thermal runaway are on the rise.

Lithium-ion battery fires on board planes are rarely publicised but a fire in a device could emit toxic smoke and potentially the battery may even explode, causing damage to the aircraft and putting lives at risk.

There are many cases where lithium-ion battery fires have caused planes to be diverted as an emergency and the average cost of that in the USA is $400,000.

Richard revealed: “AvSax is the result of many years of development, drawing on experience from the production of an alternative sandbag we invented called a BlastSax designed for the military to reduce the impact of fragmentation generated by small improvised explosive devices.

“The danger is that with so many poor quality and fake batteries around there is no doubt that incidents will continue to happen. The fact that AvSax have been deployed so many times shows there is a real need for this product. Any fire on board a plane is a frightening prospect but the AvSax has proved itself in action time and time again.”

A recent estimate revealed that aircraft carrying just 100 passengers could have around 300 to 500 lithium batteries on board when you tot up all the laptops, cameras, e-readers, tablets and mobile phones that need them. There is always a possibility that poor quality or damaged batteries can overheat, causing them to go into thermal runaway which could lead to the device catching fire.

The Federal Aviation Administration (FAA) in the USA has reported 191 fires between 1991 and January 2018 from lithium batteries carried on-board aircraft as cargo or baggage. Ominously, of those, 46 were reported in 2017.

EDS Ltd also produce the pioneering FloodSax sandless sandbags that inflate on contact with water to act as an effective barrier to keep floodwater out of homes and businesses. Around 2.5 million have now been sold worldwide. FloodSax are also ideal at soaking up leaks and spills inside.

So how do AvSax work?

If an electronic device starts to seriously overheat or emit smoke the cabin crew will pour at least two litres of water into an AvSax. It is imperative to first knock down the flames from the device using an on board halon fire extinguisher, then transfer the device into AvSax before it reignites. Additional water is then required. The water activates the polymer gel inside the bag causing it to expand around the device. Should the device keep on venting then the AvSax is tough enough to absorb the energy.

The AvSax cools the batteries in the device, reducing the likelihood of the battery igniting but if it does go into thermal runaway it is all contained within the bag.

Amazingly, the water is absorbed into the internal lining of the bag so the device is dry when it is removed.