A FloodSax alternative sandbag before it comes into contact with water

An anti-flood barrier made from FloodSax sandless sandbags 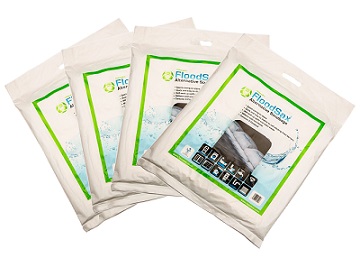 Desperate Londoners resorted to trying to make sandbags out of dried leaves as water poured down steps and into basement flats during recent torrential rain and floods in the capital.

News website MyLondon revealed that flatmates in Camberwell were left totally unprotected against the floodwater and so used anything they could get their hands on to try to stop it getting into their home.

They also spent three hours shovelling water with buckets to try to minimise the damage. One of the flatmates, 23-year-old Zack Dove, said they were forced to create makeshift sandbags to protect the basement level of their home as flood water rushed in and kept rising during the hours-long heavy downpour.

He said: “We got some buckets and started picking up water and throwing it out on the street. We made some makeshift sandbags with dried leaves.”

This just begs the question, what can people who live in basement flats and those who live on street level do when flash floods strike?

Councils have no responsibility to provide sandbags and the Environment Agency warns people they are responsible for their own flood protection.

The Environment Agency states: “Don’t assume the authorities will provide you with sandbags in a flood emergency. It’s the responsibility of property owners to take appropriate action to protect their property from flooding. Sandbags are relatively ineffective when compared to purpose-built flood protection products. We strongly encourage people to use these products.”

One of the best known and most widely used flood protection products are FloodSax alternative sandbags. Some councils now realise that FloodSax are so versatile - space-saving to store and quick and easy to deploy - that they recommend them as ideal for flood protection, flood control and flood resilience.

Gosport Borough Council in Hampshire urges its residents to use FloodSax, saying it has evaluated the bags. The council adds: “FloodSax have many advantages over traditional sandbags, being easy to store and move, easy to use and, importantly, easy on the environment, having a significantly lower carbon footprint.”

FloodSax are vacuum-packed in packs of five easy-to-carry bags which are exceptionally space-saving to store. To deploy FloodSax as alternative sandbags when a flood is forecast or is actually happening, simply immerse them in 20 litres of water in a large bucket or tub. You could even use a hosepipe or, if time is really critical, the floodwater itself.

The FloodSax will then expand in around seven minutes to weigh 20kg (44lbs). A special gelling polymer inside simply absorbs the water and then keeps it in the FloodSax so it can be used for however long the emergency lasts, which could be several months.

Each row of FloodSax will keep out approximately 6 inches of water and usually two or three rows are enough to keep most floodwater out. It means they are ideal for flood prevention to prevent damage from flooding.

The best place to look for anti-flood devices is on a website run by the charity the National Flood Forum. There it has a list of products in a directory known as Blue Pages http://bluepages.org.uk/

FloodSax alternative sandbags are available at 900 branches of Travis Perkins (product code 868499) and for more outlets please go to http://www.floodsax.co.uk/buy/uk-suppliers/