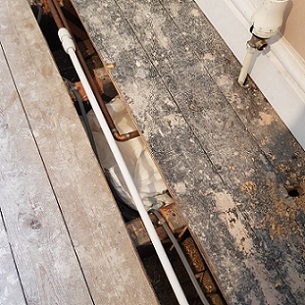 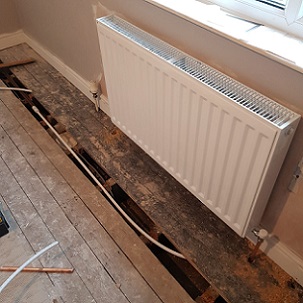 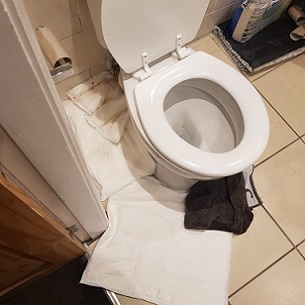 FloodSax protecting the floor from a leaking toilet

Why one plumber never leaves home without his pack of FloodSax sandless sandbags to soak up leaks from radiators, boilers and pipework

A plumber has revealed how a ‘sandless’ sandbag saves time, money … and ceilings.

James Lucks from Huddersfield-based Lux Plumbing and Heating will now never leave home without a pack of multi-purpose FloodSax alternative sandbags in his van as they have proved themselves in action at all kinds of plumbing scenarios from leaking pipes to faulty boilers and weeping radiators to overflowing toilets.

FloodSax resemble large pillowcases until they come into contact with water which is why they are brilliant to use in homes and businesses to soak up leaks and spills.

FloodSax contain a special gelling polymer with hundreds of absorbent crystals which absorb up to 20 kilos of water. If they are submerged in water this causes them to quickly expand in just 3 minutes until they resemble a traditional sandbag to stop floodwater pouring in from outside. If the water is just a leak or spill then it will absorb quite a lot before it really expands and its white cover will also show up watermarks so a leak can be quickly spotted and repaired.

James was called to a house where a toilet was leaking from a corroded old lead pipe. He put FloodSax around the toilet and across the bathroom floor just in case the leak worsened … and it did in a massive way.

James also revealed how FloodSax save him time and his customers money.

He revealed: “I was called to replace a radiator and most of the time I’d need to drain down the entire central heating system to do it. Sometimes I’m able to slip FloodSax under the floorboards and below the pipe which means I’m able to just remove that radiator without draining the entire system. Any leaks that come out of the pipework during the operation go straight onto the FloodSax and are soaked up. It’s a massive time saver.

“That’s the beauty of the FloodSax – you can slip them into the tightest and seemingly most inaccessible places where you’ve no chance of getting a bucket and they’ll absorb any leaks and spills. Usually only a bit of water gets on them so I pop the FloodSax in my bucket and can use it at five or six jobs like this before I’d need a new one.”

James was also called to deal with a faulty stop tap at a house in Huddersfield and so had to turn the water off in the road. When he removed the cover plate he spotted there had been a leak inside where the tap was as it was covered in dirt, silt and water. James popped a FloodSax down which soaked all the water up so he could clear away all the muck and turn the tap off.

“There must have been 5 litres of water down there but it was all absorbed by the FloodSax so I could sort the problem out quickly,” he said. “I now regard FloodSax as one of my most important ‘tools of the trade.”

Plumbers and anyone else wanting more information can contact FloodSax by email at info@edslimited.co.uk, phone 01484 641009 or visit the website at www.floodsax.co.uk