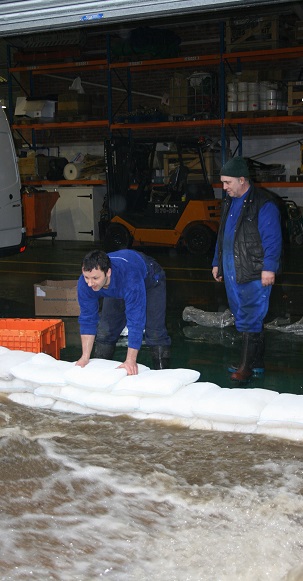 This wall of FloodSax alternative sandbags kept a raging torrent of floodwater out of this warehouse saving potentially £360,000 damage

How FloodSax alternative sandbags worth £150 can save you claiming £70,000 on your flood insurance

Flooding is the worst disaster that can happen to a business as the damage is often catastrophic and the amount of money insurance companies have to pay out is way above other claims.

That’s why it’s so crucial for businesses to have flood prevention plans and equipment such as FloodSax alternative sandbags ready for any flooding emergency from flash floods to internal leaks.

According to the Association of British Insurers (ABI) the average claim for a flooded business is £70,000 – that’s seven times higher than the average non flood claim which is around £11,500.

This includes burglaries which is why floods are known as “the thief who takes everything.”

Flooding is the greatest natural disaster risk in the UK, with an estimated 1 in 6 properties in England and Wales, 1 in 11 properties in Scotland and 1 in 34 properties in Northern Ireland now at risk of flooding. Six of the 10 wettest years on record have occurred since 1998 so climate change can be seen to be having a major impact on this.

Sadly many businesses never reopen after a severe flood and the reason is that water damages everything. Here is a brief insight into the horrendous disruption it will cause and what will need doing to repair it.

Straight after a flood the premises are potentially dangerous, especially if you need to go back in to salvage equipment or to retrieve vital documents.

You’ll need to make sure the gas and electricity is fully switched off – the risk of electrocution is a very real danger – and be aware the water will be badly contaminated with all kinds of bugs and nasties and there will be debris lurking beneath the surface.

Then loss adjusters are likely to get involved organising stripping out your business premises before renovation work can even begin.

That will be delayed even further as the building will then need time to dry out – and this could take weeks or even several months depending on the extent of the water damage.

Finally, the renovation work can begin once a builder has been appointed – but bear in mind builders will be in very high demand if an area has been flooded so that could lead to further delays.

Then costs are spiralling – some raw materials have doubled in price in recent months due to the pandemic while other products are in very short supply or you simply can’t get hold of them.

So, after all this is done, it’s not unusual for a business to be shut for a year or more after a flood.

Your may have to lay off your workforce and some will never return. The impact on their lives could be horrendous too.

Your profits will probably nosedive as you’ll either have to relocate or, if feasible, just run the business online.

When you get going again you’ll probably need to invest heavily in advertising and promotions to let customers know you’re back in action.

Suddenly the cost of flood prevention equipment such as FloodSax sandless sandbags seems to be extraordinarily good value for money.