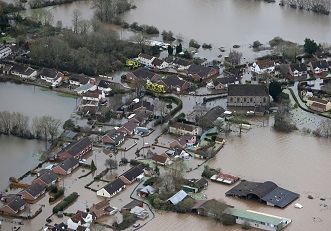 Severe flooding hit the Somerset Levels in both 2012 and 2014

Just why does climate change lead to more flooding?

Climate change is happening … and it means our weather is due to get even wetter.

No-one can now surely deny that the world is warming up due to climate change and a warmer atmosphere holds more moisture.

According to the Countryfile website, for every 1ºC increase in temperature the air can hold about 7% extra water vapour. Winters are becoming warmer and wetter, so the ground is often saturated and unable to absorb sudden bursts of extreme rain – and that has certainly been the case this winter with severe floods in the midlands and Yorkshire with Doncaster and Fishlake particularly hard hit.

The UK Centre for Ecology & Hydrology says: “There has been an increasing trend in flooding over the last four or five decades in parts of northern Britain and this is at least consistent with what we may expect in a warming world.”

Part of the reason for this winter’s wet weather is that the jet stream tracked south, propelling cyclonic systems across the UK. Heavy rainfall in early November caused massive flooding problems for parts of South Yorkshire, Derbyshire and Nottinghamshire.

Rainfall and flooding is impossible to predict. A cloudburst can cause flash flooding which will quickly overwhelm drains, running off roads and down driveways to flood homes and businesses, causing terrible damage, trauma and misery.

Weather experts talk about the risk of one in 100 years flooding events – known as the 100-year flood - but this hardly means that if an area has suffered a severe flood it won’t have another for a century. The Somerset Levels suffered one in 100 year floods in 2012 and 2014, for example.

Prof David Demeritt, professor of geography at King’s College, London, said: “Just because it happens once it doesn’t mean you’re good for the next 100 years. Climate change makes it possible that significantly more houses are going to be at risk.”