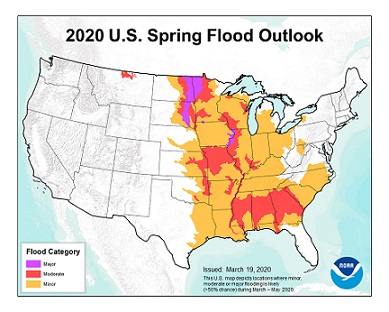 Almost 130 million people are set to be at risk of flooding in the USA this spring with almost half the country’s 50 states due to be deluged by higher than average rainfall.

The country’s National Oceanic and Atmospheric Administration (NOAA) has just released its spring flooding outlook … and it makes grim reading with heavy rain expected in the central and eastern United States on top of already saturated ground.

NOAA spokesman Ed Clark said: “Nearly every day dangerous flooding occurs somewhere in the United States and widespread flooding is in the forecast for many states in the months ahead.”

The NOAA says flooding is likely in 23 states from the Northern Plains south to the Gulf Coast with the most significant flood potential in parts of North Dakota, South Dakota and Minnesota. A risk of minor flooding exists across one-third of the country. Large parts of Alaska are also likely to experience above-average rainfall in the months ahead.

The NOAA prediction comes after a devastating year of flooding in America’s heartland. Between February 2019 and January 2020 Iowa, Michigan, Minnesota and Wisconsin all experienced their wettest 12 months on record and Montana, Nebraska, Wyoming and the Dakotas suffering their second wettest.

Many Americans use FloodSax sandless sandbags to protect their homes and businesses from flooding. FloodSax alternative sand bags are space-saving to store and easy to deploy. It means people have peace of mind and are ready for action 24/7 to prevent a flood.