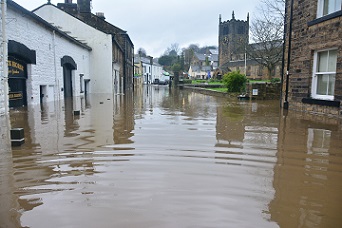 Make sure you know your flood risk

People are burying their heads in the sand when it comes to flood risk, a shock survey has revealed.

The new survey has revealed that less than a quarter of people bother to check the flood risk before moving into a new home despite the widely publicised problem nationwide.

A YouGov survey by property data company Landmark Information Group reveals that only 23% of people checked flood risk before moving into their current home with a further 12% checking later as an after thought.

The figures are revealed only days after more than 100 flood alerts were issued – predominantly in Yorkshire – by the Environment Agency, following a deluge of a month’s worth of rain in just a matter of hours across the country.

The research went on to identify that there is serious confusion over who is responsible for protecting a home against flooding with 62% wrongly believing their local council has that responsibility.

More and more people are preparing for floods 24/7 by having a stock of FloodSax alternative sand bags which are space-saving to store and quick and easy to deploy.

Flood expert Mary Dhonau has produced an extensive Property Flood Resilience e-Book, which contains many case studies that focus on the steps people have taken to make their properties resilient to future flooding. This is available to download for free here: http://edition.pagesuite-professional.co.uk/html5/reader/pro...