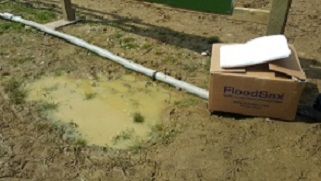 A top showjumping event faced being cancelled after parts of the course became waterlogged … but the day was saved by pioneering sandless sandbags.

But Adel Oueslati, owner of Belgium company Aquasorb, read about it in the media, contacted show director Luc Postelmans and told him he may be able to solve the problem.

They agreed to let him try and he arrived with FloodSax sandless sandbags made by Yorkshire company Environmental Defence Systems Ltd.

He strategically placed 260 around the sodden course on the puddles on either side of the jumps and within 30 minutes they had soaked up all the water and the three-day event went ahead.

Adel said: “It was amazing how well the FloodSax worked. The event organisers want me to attend the next one with the FloodSax – but said they would rather I could bring the sun with me instead.”

Environmental Defence Systems Ltd managing director Richard Bailey said: “It’s amazing that FloodSax end up being used in ways we could never have dreamed of … but this incident has opened up a whole new potential sports market for us.”