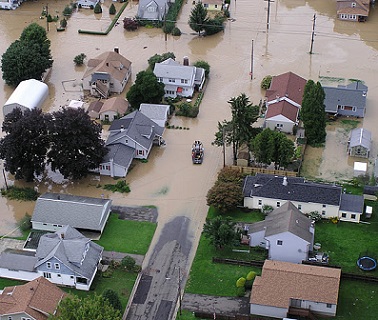 The US has around one million homes in areas vulnerable to flooding and the US Government has come up with a radical flood protection plan to solve the problem.

If you want to see action on climate change to prevent flooding then this is it on a massive scale.

A new report says the US could save more than $1 trillion over the long term by removing roughly 1 million homes from flood-prone areas and relocating the people who live there to higher ground.

Since the late 1980s 43,000 homes have been bought out by the Federal Emergency Management Agency but it’s been a struggle due to lack of funding, people not wanting to move and all the red tape needed to relocate residents.

According to Energy and Environmental website E&E News, homes built on floodplains that then keep getting flooded keep building up loss after loss for public disaster schemes such as the National Flood Insurance Program run by Federal Emergency Management Agency (FEMA).

Keith Porter, one of the study’s authors and a structural engineering researcher at the University of Colorado, states the obvious: “We never should have been building in the floodplain in the first place. Flooding is the country’s biggest risk and it’s time to solve that problem.”

How do all these mind-boggling sums add up?

Buying and then demolishing one million flood-prone homes would cost $180 billion but that spending would generate $1.16 trillion in savings over 100 years, mostly by averting property damage that is typically paid for by federally subsidised flood insurance or other disaster programmes.

To read more go to https://www.scientificamerican.com/article/removing-1-million-homes-from-flood-zones-could-save-1-trillion/

Residents and business in areas prone to flooding need to make sure they are protected 24/7 from the risk of floods.

Many Americans use FloodSax sandless sandbags to protect their homes and businesses from flooding. FloodSax alternative sand bags are space-saving to store and easy to deploy. It means people have peace of mind and are ready for action 24/7 to prevent a flood.