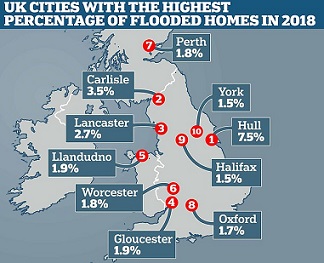 Map shows the percentage of homes flooded in just 12 months

Here’s a top 10 list that towns don’t want to be on ….  the worst places in the UK for flooding.

Hull gets the top spot by a mile with a staggering 7.5% of homes in the East Yorkshire city previously having suffered from flooding.

Throughout the whole of Britain 0.7% of homes have been hit by flooding at some point.

The data has been compiled by online price comparison site MoneySuperMarket which reveals that apart from Hull and fifth-placed Llandudno all the top 10 locations saw an increase in the percentage of homes that had flooded previously between 2017 and 2018.

This can be attributed partly to last year's 'Beast from the East', which brought 21cm of snow, compared to only 8cm in February 2017. The floods came when that snow melted.

For the second consecutive year Hull made it to the top of the pile even though fewer homes were flooded. According to MoneySuperMarket, 7.5% – a tad lower compared to 2017’s 7.6% – of houses in Hull flooded.

The MoneySuperMarket survey, based on 1.25 million home insurance quotes in 2018,  found that the least-likely areas of the country to flood was Crewe in Cheshire with only 0.1 per cent of homes having ever been damaged by water.

One way to protect your home or business 24/7 is to have FloodSax sandless sandbags which are space-saving to store and very quick and easy to deploy. FloodSax are transformed from being as light as a pillowcase to more effective than traditional sandbags in just three minutes and are ideal at soaking up spills as well as stopping any floodwater.

More than 2.5 million have now been sold worldwide and are available at branches of builders merchants Travis Perkins. Alternatively contact FloodSax on 01484 641009 or via www.floodsax.co.uk