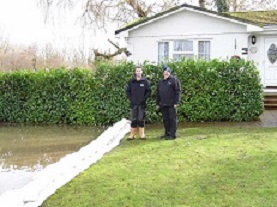 Imagine waking up and finding your back garden flooded like this … just one of many stories of serious flooding that have happened over the last five days of torrential rain across the UK.

It’s happened in Nottingham and in desperation people living in this badly flooded area contacted the Environment Agency for sandbags only to be told the Agency doesn’t provide them.

And local authorities also have no responsibility to provide them so it’s up to homeowners and businesses to arrange their own flood protection.

The flooded garden is in Basford near to Nottingham City Hospital. According to the Nottingham Live news website, 31-year-old Jodie Ellis took this photo from the window of the home she shares with her partner Jenna Ellis, 32, and their children aged 10 and three.

"The garden has flooded a couple of times before, but not to this extent," said Jodie. "We woke up this morning and it was like that. It's about a metre away from the back door and much deeper at the end of the garden.

"I'm worried about it coming in the back. We have two kids and two dogs and it's worrying. You don't know what's coming up through the water. It's dirty water. It's never come up this far before."

The equivalent of two months’ rain has fallen in the Lincolnshire town of Wainfleet in just two days, leaving several homes badly flooded.

Jean Hart, who has lived in the town for 40 years, said it was the worst flooding she had ever seen.

"To see our house under water is absolutely horrendous,” she said. “The whole of my house is completely devastated.”

One proven anti-flooding device are FloodSax alternative sandbags which are space-saving to store and easy to deploy. Once they come into contact with water they inflate to weigh 20kg (44lbs) which makes them more effective than traditional sandbags at keeping floodwater out.

They are available from branches of Travis Perkins builders’ merchants and other suppliers. See http://www.floodsax.co.uk/buy/uk-suppliers/ for more information or phone 01484 641009.