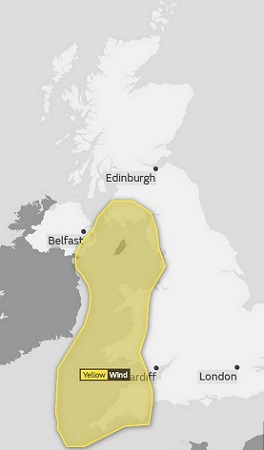 Britain is set to take a battering at the start of next week when the remnants of a hurricane slam into the western side of the country.

Now downgraded to a tropical storm called Helene, it is still expected to have 80mph winds which could cut power lines to thousands of homes and businesses and disrupt people’s travel plans.

It is due to hit overnight on Monday.

The Met Office said: "Storm Helene is expected to push north east towards the UK late Monday before clearing quickly to the north of Scotland through Tuesday morning.

"There remains large uncertainty in Helene's exact track. However, a spell of very strong winds is expected, initially for parts of south west England and west Wales, then later south west Scotland and the south east of Northern Ireland.

"Winds are likely to gust to 55-65mph quite widely in the warning area, with possible gusts of 70-80 mph in exposed places."

It said the dangers are:

The wind warning is in effect from Monday at 6pm to Tuesday at 12pm for the following areas:

Many homes and businesses now have FloodSax sandless sandbags so they are ready for bad weather 24/7.

FloodSax are transformed from being as light as a pillowcase to being more effective than traditional sandbags in just three minutes and are ideal at soaking up spills as well as stopping running water.