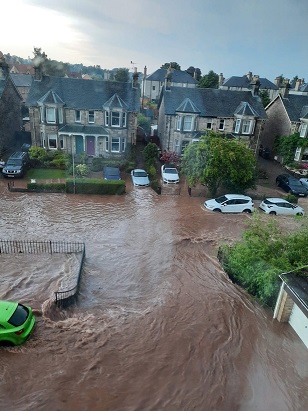 What is urban creep and how is it adding to flooding problems?

With many homes now having two or even more cars many people have transformed their gardens into driveways, often not realising they are storing up serious flooding problems for the future.

This is known as ‘urban creep’ where green land that naturally soaks up the water is removed by impermeable surfaces such as flagstones, block paving, tarmac or concrete.

So where the floodwater in the past may have soaked into the garden’s grass or soil, nowadays it is hitting the hard surface of the driveway and then running into the house or garage if the driveway has an incline that way. If the incline is the other way then water pouring down the drive flows across the road.

Add to this the immense pressure on local authority budgets which leaves drains left uncleared that means they are clogged up with debris then the water has nowhere to run. This can quickly cause severe flooding problems during torrential downpours.

Birmingham has suffered this problem in the past and one the city’s Liberal Democrat councillors, Roger Harmer, said: “When people tarmac over their drives or put outbuildings on the front of their homes the water arrives on the street much faster than it would usually.

“You might think one driveway won’t make a difference but if you have thousands and thousands of them the accumulation will have a significant impact on the speed in which the water gets to the drain.”

Scotland also suffered during thunderstorms and flash flooding in August 2020.

According to the Edinburgh Evening News the rainwater was so high some people had to be rescued by the fire service using dinghies. Scottish Canals concluded that the flooding was the result of heavy rainfall and surface water run-off.

Scotland’s Centre of Expertise for Waters which looks at all aspects of water in the country including flooding revealed that in the 25 years between 1990 and 2015 Edinburgh lost 11 hectares of land – that’s equivalent to about 15 football pitches - to urbanisation every year. About half of this loss is down to urban creep.