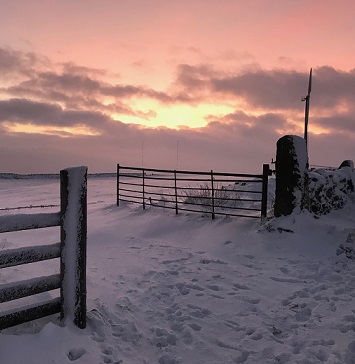 Fading winter light in the snow at Pole Moor near Huddersfield, West Yorkshire. Photo by @andyhirstpr

What’s the weather forecast for January and early February 2021? Best to look away now if you don’t like snow

The rest of January and early February is set to remain very wet across the UK with the Met Office warning of rain and ‘significant snow.’

The snow, which is due to hit the country hardest in the first week of February, will be caused by the Jetstream shifting southwards which will lead to cold air conflicting with warmer air and this difference in temperature sparks heavy snow between the two.

At this moment it’s hard to know just where that dividing line could be, but a large part of the UK is likely to be severely hit by the bad weather and it’s most likely to be in the north or the midlands. The south is expected to be deluged by above average rainfall.

The Met Office is forecasting more snow and ice across a large part of the UK this Saturday (January 16) and its longer term forecast for the rest of January is predicting frequent showers “possibly falling as snow over high ground and sometimes down to low levels.”

Oh, did we mention that there’s also cold air from Scandinavia heading our way from next Monday (January 18).

All this snow in the north and rain in the south means there is an increased chance of flooding.