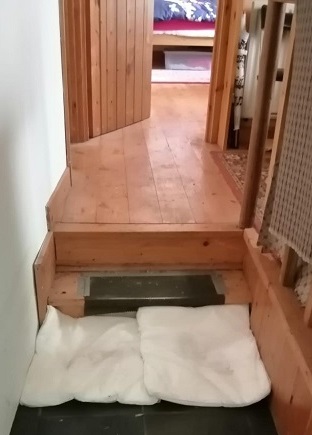 FloodSax neatly stored on a kitchen shelf in Anne’s house. These are the equivalent of 5 traditional sandbags.

Floods are part of life for a pensioner who lives in an 18th century cottage in Wales … but alternative sandbags called FloodSax means she’ll never have to struggle with a traditional sandbag again.

Anne has a triple flood risk with water from a river flowing near her cottage in Snowdonia National Park and water from a mountain behind it along with a stream running beneath her home.

She’s just 200 yards from the River Glaslyn but a breeze block flood wall protects her from it when it regularly floods.

Water also comes cascading down a mountain behind her and feeds a stream that runs directly beneath her home. This means water can bubble up under the cottage so Anne deploys FloodSax alternative sandbags which soak the water up, preventing damage to the rest of her home which was built in around 1760. Where she lives in Gwynedd, the rainfall can be excessive with 83mm recently falling in less than 24 hours.

FloodSax resemble large pillowcases until they come into contact with water. The semi-porous inner liner within FloodSax contains a special gelling polymer which absorbs 20 kilos of water so they miraculously expand to become instant ‘sandbags’ but without the sand.

Anne was first provided with FloodSax by Natural Resources Wales about 5 years ago and would now never go back to traditional sandbags.

“I just couldn’t lift sandbags as they are way too heavy,” she said. “I put FloodSax against the steps in the hallway and by the door to soak up any floodwater so they don’t usually fully expand before I move them which makes them so manageable. I even pop one over the drain in the downstairs shower room in case water backs up through there.

“I can store them in the kitchen as they are so light and easy to keep on a shelf. They are quite pleasant to look at too – so much better than sandbags that wouldn’t be so nice to see. I just grab them when I need them. I’d recommend them to anyone who has to use sandbags.”

Natural Resources Wales employs 1,900 staff across Wales with a budget of £180 million. It was formed in April 2013 to take over the functions of the Countryside Council for Wales, Forestry Commission Wales and the Environment Agency in Wales, as well as certain Welsh Government functions. It is responsible for protecting the environment and prosecuting those who break the regulations.