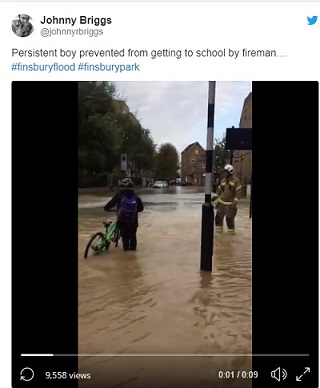 No go … a firefighter stops a schoolboy from wading through the fast-flowing flood in Finsbury Park, London.

People woke up in north London to discover their road had been transformed into a fast flowing river.

Residents needed to be evacuated after the large water main burst with 12 fire engines and 80 firefighters sent to the scene in Finsbury Park, north London.

Roads were submerged in fast flowing ankle deep brown water … but Thames Water said it was complex to fix quickly which meant the water remained a flooding threat for a few hours.

Resident Matthew Christian told PA: “It’s really shocking to see that amount of water flooding the streets with such power that it’s ripping up the road and rushing down the street into people’s front gardens.

“It’s not the kind of thing you expect to see in Finsbury Park on a Tuesday morning in October.”

The incident shows that flooding can happen anywhere and at anytime.