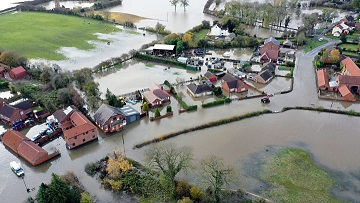 Disastrous flooding in the village of Fishlake near Doncaster

The disaster that befell the village of Fishlake near Doncaster and other parts of Yorkshire graphically shows that flooding is notoriously difficult to predict and can happen just about anywhere these days.

A weather expert has revealed it only takes a slight variation in a normal weather pattern to lead to severe flooding problems.

So says Hannah Cloke, professor of hydrology at the university of Reading who advises the Environment Agency on flood risk and flood forecasting, works with local flood groups and advises local and national government on flood emergencies.

She said: “Despite the work of some of the brightest scientists, the world’s most advanced supercomputers and the commitment of hardworking people on the ground, floods are just difficult beasts to pin down. And if you’ve ever thought that your home could never be affected, you should know that floods can happen almost anywhere, at any time.

“In Doncaster in early November 2019, only a slight variation in a fairly typical weather system was enough to cause flooding. Cold and warm air masses regularly press against each other close to North America, creating an Atlantic storm factory. These weather systems are often fired towards Europe too by the strength and direction of the jet stream. Damp ground in the north of England is also par for the course. But add one heavy downpour, caused by a rotating weather front getting ‘stuck’ over one area, and you have a flood.

“Flooding is hard to predict and prepare for. But floods happen. They always have — and we know that as the global climate warms due to human activity we are likely to see more of some types of flood in Britain. It’s hard to convince people who don’t know they are at risk that they should prepare for the worst.”

Homeowners and businesses still believe their council will come rushing to help if flooding is imminent but that’s simply not the case. It means people are not prepared and end up feeling badly let down as they have done in the recent catastrophic floods.

More and more people are preparing for floods 24/7 by having a stock of FloodSax alternative sand bags which are space-saving to store and quick and easy to deploy.