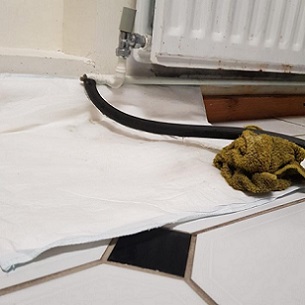 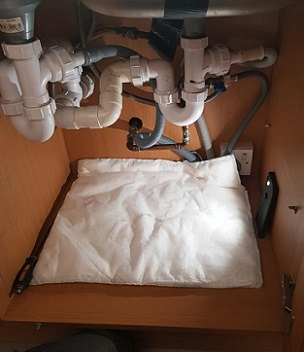 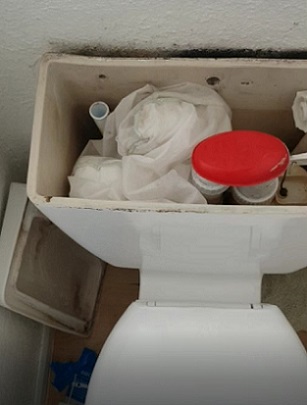 Why plumbers need FloodSax to be sure of staying dry

Drips, leaks and even drenchings are the hazards plumbers face every day.

But FloodSax are now making their lives easier … and drier.

For the ultra-absorbent FloodSax resemble pillowcases in their dry state so can be slipped into the tightest spaces beneath troublesome pipes and leaking radiators.

Huddersfield plumber James Lucks uses them all the time and has revealed that what may seem to be straightforward plumbing job can often have its pitfalls. Problems are always around the plumbing corner.

James said: “I was draining a central heating system down but the radiator I needed to use to fix the hose to the outside was old and had been painted several times.

“Old paint and debris meant it was impossible to get a complete seal so some of the water was going to escape and run on the outside of the hose and across the floor. A FloodSax popped beneath the hose meant all the water was captured and the floor remained dry.

“There is absolutely no way we could have got a bucket under that so a FloodSax was the only way.”

James’ next plumbing task was to explore a problem with water in pipework beneath a sink to see why the water was being restricted.

It was a bit like the spaghetti junction of plumbing in there with little room for James to get his hands in to unfasten the pipework. When he put his smallest drip tray in it restricted his movement so he brought it back out and replaced it with a FloodSax.

James explained: “The taps and water were turned off but there is always some water in the pipework and the FloodSax quickly absorbed it all. The FloodSax is completely flat in its dry state which gave me plenty of room to get in and get the job done.”

Toilets are also notoriously ‘drippy’ things to deal with. When James had to put in a replacement flush valve the cistern needed to be completely drained of water.

James explained that most plumbers still do this the old-fashioned way using a rag and a bucket.

“Toilets drain down around three-quarters into the toilet itself but then you still have to get the rest of the water out,” he said. “Normally it’s a case of using a rag to soak it up and then wring it out into a bucket. What I do is pop a FloodSax in which absorbed all the water, soaking every drop up.

“I also put one on the floor to catch any water in the pipe when I uncoupled it from the water pipes. The FloodSax are incredibly versatile – you can re-use them on jobs until they’ve absorbed so much it’s time to throw them away in the general waste and start again with a new one.”

FloodSax come in handy-sized packs of five so are very space-saving to store on vans and carry into homes and businesses where plumbers are working.

FloodSax are best known as alternative sandbags and the special gelling polymer inside them absorbs 20 litres of water to become instant sandbags in a few minutes. They then weigh around 20kg and are effective at keeping floodwater out of homes and businesses, saving a fortune in damage.

But more and more people are now using them indoors to soak up drips, spills and leaks, often in hard-to-reach places such as under floorboards, radiators and boilers.

It means they are prepared for any flooding emergency 24/7. FloodSax are white so the watermarks on them will show just where the leak is landing.

Plumbers and anyone else wanting more information can contact FloodSax by email at info@edslimited.co.uk, phone 01484 641009 or visit the website at www.floodsax.co.uk