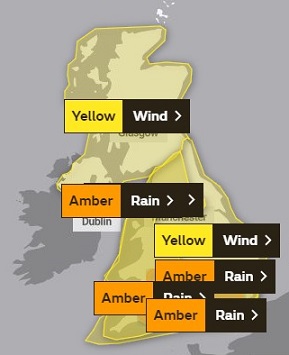 Storm Dennis looks like it will cause real problems this weekend with the Met Office already warning of torrential rain and strong winds.

The storm will strike the UK on Saturday and Sunday and with more Amber weather warnings than for the devastating Storm Ciara last weekend people have been urged to prepare for flooding although the winds won’t be as severe.

The Met Office warns that tomorrow (Friday) will see spells of heavy rain, strong winds and further snow for parts of the UK with several severe weather warnings in force before Storm Dennis brings further very wet and windy weather on both Saturday and Sunday.

Wind gusts will widely exceed 50mph, even across some inland areas, with gusts of more than 60mph possible over hills, coastal areas and exposed locations.

The Met Office says heavy rain is also expected and with it falling on already saturated ground there is a risk of further flooding over the weekend.

More than 2.5 million have now been sold worldwide. They are available at all branches of Travis Perkins or for the full list of our UK suppliers go to http://floodsax.co.uk/buy/uk-suppliers